Hotline To The Underground 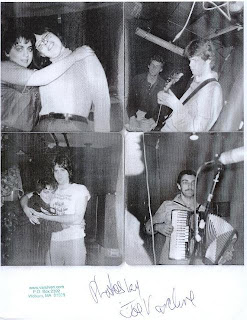 p.s. THIS IS A PARODY OF JIM SULLIVAN INK!
Janis knows that Jim came first!

There are four songs on 24 track 2" tape - a new version of "They Saved Hitler's
Brain" as well as The Mighty Ions classic "Big Noise" and two other titles.

While we taped the 4 multi-tracks THE AXE also recorded a bunch of music as if it were a live broadcast, running through the set quickly and efficiently. That is recorded through the 24 track SSL board and onto DAT tape. That is the Live album that will be released. The cover is being created by the mysterious Tontileo. Tontileo may do the screams on Hitler's Brain - the ones made famous by Rita Ratt.

You can hear 30 seconds of "Tonight We Fight" from Boston Rock & Roll Anthology 14
here: http://allmusic.com/cg/amg.dll?p=amg&token=&sql=10:3xfyxqu0ldke 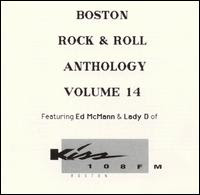 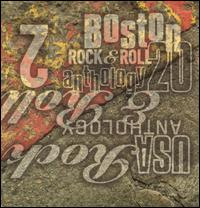 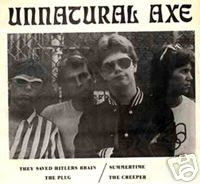 This is the former Sanctuary where Gary Shane recorded, the studio where
Donny Wahlberg and Jordan Knight produced Tommy Page, and where the
New Kids On The Block CDs were recorded. Joe Vig was the studio manager in the summer of 1988 when Brad Delp of the band BOSTON performed with Bruce Arnold, engineer Les Arnold's brother from Orpheus, and the great Bernard Purdie. They re-recorded "Can't Find The Time To Tell You" and we should start a petition to get those recordings released along with the material Brad recorded solo with David Brown that summer, 19 years ago this week!

Bernard also recorded two songs on Jo Jo Laine's unreleased album, "Get Back Jo Jo" in 1988. He played on The Supremes' "BABY LOVE" and The Beatles' BLACKBIRD. A deal was struck with Fullback Records out of Washington DC while Jo Jo was still alive but now that she's passed on her children and her producer (Joe V) are re-evaluating the music and the book on her life. The basic tracks were recorded at Normandy Sound with Producer Jimmy Miller on August 18, 1987, exactly a year before the Unnatural Axe and Bernard Purdie sessions.

The Kirkland Moves to The Cantab

Janis is sorry we didn't send out a formal Birthday Missive from Jo Jo's tribute site - http://myspace.com/jojolaine We'll try to get to that. Her memorial service in Danvers was surreal, as Helanie Saad and friends can attest.
There was a second burial, of a veteran, right next to Jo Jo's memorial within the same 30 minutes. It was horrible, they were talking during Jo Jo's service, they blocked our cars in, and they acted like we were in THEIR way. A Catholic
cemetary double booking memorial services at the same area (the plots were right next to each other) is absurd. They did the 7 gun tribute or whatever, they glared at us for talking to each other (they were yapping away when the Reverend tried to give Jo Jo her final send off) ...so disrespectful.

You can read Joe Vig's article on Chris Mascara from the Medford Transcript:
http://www.mascaramusic.com/press/medfordtranscript-2006-4-20.html

See the Kirkland Calendar...oops, Club Bohemia at the Cantab...at the bottom of this page or go to Http://myspace.com/liveatkirkland

At 2:56 PM the song "Centerfold" By J.Geils Band was played at Tiger Stadium in Detroit, Sunday afternoon July 8, 2007. Instrumental version.

a review of Centerfold is here:
http://allmusic.com/cg/amg.dll?p=amg&sql=33:djftxct5ldhe

Ours came in the mail July 7th and it is F A N T A S T I C! Crunchy Crunchy metal around flawless pop tunes, Louis' voice is in great shape and Gene's guitars cut through. Lou Spag from FORTUNE is on bass and Joey Vee is still slamming on the drums. For the real History of New England rock check out this site
http://newenglandrock.blogspot.com/

Has anyone noticed how rock writer Jim Sullivan has modeled his site after mine! My site was created on July 8, 2007...look at my bio and his bio to see the similarities:

http://www.jimsullivanink.com/
Jim has covered Boston arts and events since 1978. In addition to this column, JimSullivanInk, he is a freelance columnist for the likes of the Boston Phoenix, the Christian Science Monitor, Search Boston and Hall of Fame Magazine.

(p.s. everyone, this is a parody, we know that Jim Sullivan Ink came first and we think he's doing an excellent job with his page.)

Just when you thought it was safe to go back into the water The Count is releasing his album SECRET THINGS. This was kinda like The Sutherland Brothers & Quiver when The Count band of Joe Vig and Eric Brown teamed up with The Couper Brothers in 1988 / 1989 and tracked about 20 titles. Most of this is unreleased
http://myspace.com/secret_things

This is the long-awaited follow-up to 2005's LIFE'S WORK album from Mr. Vig

THE FOOLS TO RELEASE NEW DISC:
Producer Anthony J. Resta (Duran Duran) has recorded a new album with THE FOOLS.
He and Leo Black of THE FOOLS appeared on Visual Radio in Burlington recently.
The show is airing in Winthrop and Somerville and will be elsewhere soon
http://www.visual-radio.net

by Joe Viglione
Special to Janis Reed's HOTLINE TO THE UNDERGROUND

Medford recording artist Chris Mascara has come up with an intriguing and innovative six-track, five-song CD, "Spell," on Mr. Fibuli’s Records. It’s a smart and highly polished sophomore disc from the singer who played the lead role in a 2000 production of "Jesus Christ Superstar" opposite another former Medford resident, Extreme’s Gary Cherone (as Judas).

The music on "Spell" leans toward the dark side, the semi-autobiographical "Percy’s Revenge" an easy fit inside the repertoire of, say, Marilyn Manson. Think early Alice Cooper circa the "Love It To Death" and "Ballad Of Dwight Frye" phase.

Born in Long Island, N.Y, Mascara grew up in South Florida and "came up to the Boston, specifically Medford/Somerville, to go to Tufts University" in the 1980s. He met his wife, Deb, at Tufts in the early 2000s.

"We have made the neighborhood around Tufts our home ever since, buying an adorable updated 1920’s bungalow in Medford Hillside," he said.

Mascara and his wife appeared on the Food Network show "The Secret Life of...Pastries" when they filmed a sequence at the newly opened Danish Pastry House, located at 330 Boston Ave.

"I like Medford because its neighborhood-feel is reminiscent of the Long Island area where my extended family lives," Mascara said. "In fact, we’ve been ‘adopted’ by our 88-year-old Sicilian neighbor, Frank Amato. We share family recipes and dishes, go food shopping together and discuss gardening tips. I even helped him trim back his grape vines."

But do the neighbors know the singer’s music was dubbed "Sinister Pop" by students who write for the Tufts Daily?

The current members of Mascara’s group come from other parts of New England to play in the band. Chris Girard, the bassist, lives in Manchester, N.H. with his wife and family. Rikki Bates, the drummer, hails from Cape Cod and the group rehearses together in Woburn.

"I learned how to play a Bach piece on the organ entirely by ear when I was 8 years old, having never learned a note of music previously," he said. "Music was always part of family life, but not until this discovery of my innate ability did I receive formal classical music training on the organ. By my early teens, I was a professional substitute organist, playing church services, weddings, etc., and also, on the radio. I have press dating back to the late ’70s chronicling my early artistic accomplishments."

Fast-forward to his years in the Boston area.

"After transitioning from classical organ as my primary vehicle to rock guitar in my late teens, I was in a Tufts psyche band, The Void before I came into my own as a lead singer/songwriter," Mascara said. "A harbinger of things to come, my real introduction to
Boston’s music fans was when I played the sitar on the George Harrison song ’Within You Without You’ in Boston Rock Opera’s "SGT. PEPPER’S..." productions in ’95 & ’96."

Listeners can hear those Beatles influences in "Time Is A Lie," the third track on "Spell," a short CD that is well paced and gathering a good amount of local area press.

The singer/songwriter is industrious, to say the least.

"After reconstituting the Mascara trio and allowing the new line-up to gel, in 2003 I designed an eclectic variety show entitled Scara’s Night Out and showcased it at the Lizard Lounge in Cambridge," Mascara said. " It’s a sell-out bi-weekly series and included local rock stalwarts, Celtic dulcimer performances, Portuguese/English hip-hop, burlesque dancers, Charlie Chaplin-esque skits, acoustic and multimedia comedy, reproduced old-time radio acts, poetry, belly dancing, electrified spoken-word blues; and even drew The Wu Tang Clan out of hiding and into the audience for the theatrical madness.

"In addition, I always continue to immerse myself in various musical endeavors: performing ragas and original compositions with my wife Deb in our project Sitar Tabla Power, creating new material for MASCARA, singing in a Sinatra lounge combo at cabaret nights and Mardi Gras/Bastille Day Balls as well as contributing lead vocals to a Paula Kelley song and to a track on the non-profit Project: Think Different compilation album," he continued.

Three of the tunes on "Spell" come in under three minutes, the driving "No Afterlife," like the rest of the album, recorded at the Indecent Music studio in Medford, owned by engineer Hendrik David Gideonse.

"My creative process involves three alternate guitar tunings besides standard tuning that help give my songs a distinctive flavor," Mascara said. "My early years as a child prodigy on the classical organ continue to inform or torque my rock compositional instincts. Another important factor is my bandmates’ ability to ’rock’ my expansive, sometime angular tunes, that in turn shapes the songs I bring to them.

"They match my headiness and bring the muscle and urgency that the music craves," he added. "This line-up has proven to be more edgy, raw, concise, and intuitive when it comes to interpreting my songs."

The new band is already working on a new full-length CD and plan to tour in 2006. They also plan to license the music out to movies and TV.

"I think, for instance, that the folks that produce the program, ’Charmed’ would just love Mascara ’Spell,’ especially since the show is about three modern-day witches, one of whom owns a fictional rock club," Mascara said with a laugh. "Somebody get my agent on the phone!"

For more on the band or for information on how to order your "Spell" CD, log on to
http://www.mascaramusic.com. 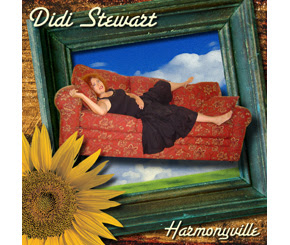 Didi Stewart has a superb new CD produced by Anthony J. Resta. It is Country Didi!
Posted by Janis Reed Ink at 11:31 AM No comments: